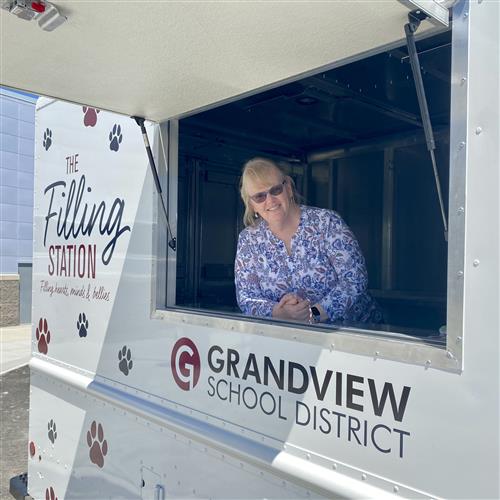 This spring Grandview School District Food Director Marcia Wagner saw one of her long-standing dreams for the district become a reality when the new GSD food truck rolled into town.

The food truck – called The Filling Station – arrived in the district at the end of April and made its official debut at the Spring into Health Fair held at Westside Park on May 20.

Wagner said she’d had the idea for a district-sponsored food truck about five years ago, but finding a way to fund it was a challenge. Then earlier this year, a grant opportunity came available and she jumped at the chance. She turned in her application and learned fairly quickly that she had been awarded a Meal Access Grant and funds from the American Heart Association.

“The uses are endless,” Wagner said. She said the food truck doesn’t actually have any cooking equipment on board. This allows for maximum useable space inside the truck. Wagner said the idea being that the truck could be used for everything from food delivery to a mobile homework center.

She’s excited to put The Filling Station to work this summer as part of the Summer Meal Program. She said the food truck will be able to drive into places where buses just can’t go, which will help improve meal access.

“We wanted a vehicle students would easily be able to identify,” Wagner said. And with the truck’s distinct white, maroon and grey color scheme, and all of the school mascots on the back – it’s hard to miss The Filling Station.